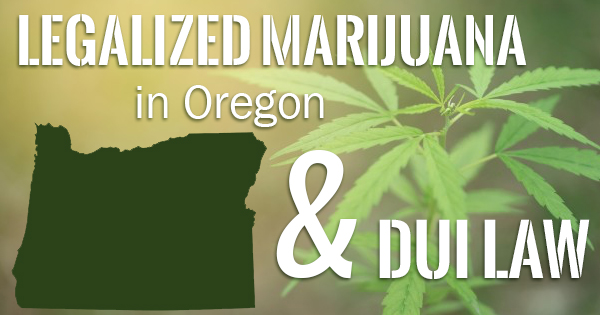 As of early July 2018, Oregon recognized the third anniversary of the state-wide legalization of recreational cannabis, aka marijuana. While casual use is legal, Oregon DUI law states that driving under the influence of "controlled substances... while adversely affected to a noticeable or perceptible degree" is still quite illegal. Cannabis does, in fact, fall under the blanket statement of "controlled substances".

"A noticeable or perceptible degree" is difficult to argue in a cannabis DUI arrest and trial. Impairment and levels of marijuana in your system are much more difficult to determine than with alcohol. There is no breathalyzer test. Urinalysis is the most reliable method to test for THC levels, but even so, accurate impairment levels can't really be recorded.

Be aware that some towns in Oregon are still wary of the presence of marijuana and dispensaries, so criticism of cannabis use may be stronger. A criminal defense attorney in Lake Oswego, for example, may have their hands full thanks to the famously back-and-forth policies of the town and its council. Even so, DUI lawyers across the state have had some degree of experience with confused drivers who hadn't realized driving "buzzed" is still a criminal offense.

To be fair, a lot of recent scientific literature has argued that driving under the influence of marijuana does not dangerously impair a motor vehicle operator. They especially highlight the effects of cannabis intoxication in comparison to the arguably stronger and more dangerous effects of alcohol consumption.

Many have even suggested turning attention away from driving under the influence of cannabis and towards distracted driving. Driving distracted by handheld devices such as cell phones triples the risk of a crash compared to sober, vigilant driving. A Harris Poll survey of 2000 adults conducted in 2017 (on behalf of the Property Casualty Insurers Association of America) actually reported that more adults ranked distracted driving (not marijuana!) as on-par with driving under the influence of alcohol or opioids.

Even if driving under the influence of marijuana is determined in the future to not be too harmful, the present laws state it is illegal. Rhett Bernstein is a criminal defense attorney in Lake Oswego and the greater Clackamas County area who knows the ins and outs of Oregon DUI law. If you believe your charge of driving under the influence of marijuana is unjustified, your best bet is consulting an experienced attorney like Rhett Bernstein to reaffirm your rights.