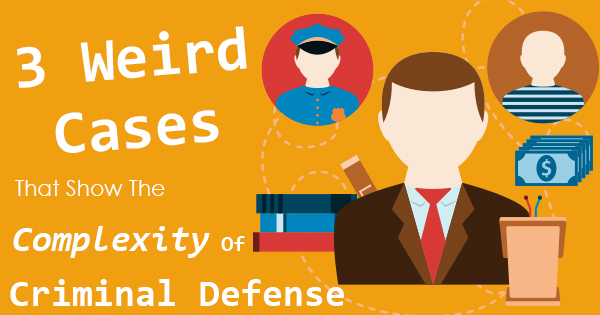 The criminal justice system seems pretty simple at first, especially if you're hooked on television courtroom dramas where every "perp" is found guilty after 60 minutes. Someone is charged with a crime, they go to court, the jury determines whether they're guilty or not guilty, and they're sentenced. Easy, right?

The truth is that legal proceedings are rarely so straightforward. There's a reason that the Sixth Amendment guarantees legal representation to criminal defendants: Lawyers can navigate the strange ins-and-outs of the court system and unique circumstances of their clients. Here are three examples of strange criminal defense cases that show the complexity of a lawyer's role in the legal system.

The so-called Twinkie Defense is one of the most notorious miscarriages of justice in the annals of modern criminal history. On November 27, 1978, San Francisco Mayor George Moscone and gay civil rights activist and Supervisor Harvey Milk were assassinated by former Supervisor Dan White inside San Francisco's City Hall. The case seemed like a pretty cut and dry first-degree double homicide, but White was actually convicted of voluntary manslaughter in 1979. Why? He and his legal team used the "diminished capacity" defense, arguing that work stress and a diet of mostly junk food such as Twinkie cakes caused White's mental health to lapse. Combined with an unhealthy dose of homophobia, the successful use of the "diminished capacity" clause in this case caused such a public outrage that California revoked its use in all future cases.

The Matrix defense, derived from the 1999 sci-fi blockbuster, basically describes a mental state where a person is convinced they are in a computer simulation, reality is warped, and they are potentially threatened by anything around them. Essentially, a Matrix defense is an extreme case of pleading 'not guilty by reason of insanity' -- a defense that rarely works outside of television dramas. However, there have been at least two notable cases where this defense was used. One was in the case of Tonda Lynn Ansley, who shot and killed her landlady in July 2002. She was found not guilty by reason of insanity based on the defense. Another defense team was ready to use the Matrix defense in 2003, when defendant Joshua Cooke was accused of murdering his adoptive parents, but he ultimately pleaded guilty instead.

No, There Is Not A Vaccine For Affluenza

'Affluenza' is a relatively new term, a portmanteau of 'influenza' and 'affluence' that describes a person's high anxiety and lack of restraint and moral understanding due to their existing personal wealth or want for more personal wealth. It had rarely been a topic of criminal case defense before this particular incident. In 2013, sixteen-year-old Ethan Couch killed four people and severely injured several others while driving drunk in North Texas. The judge on his case sentenced him to only 10 years probation on the grounds that Couch came from a wealthy family and had a warped sense of right and wrong, causing a lack of understanding about his actions. After enduring an intense public outcry, Couch was eventually sentenced to two years in prison after he and his mother fled to Mexico in 2015.